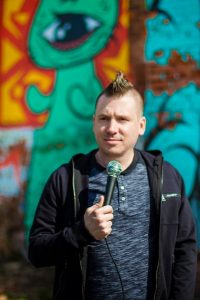 Detroit’s Dave Landau headlines around the nation. He’s appeared on Comedy Central’s Live At Gotham and was a finalist on season 8 of Last Comic Standing. He’s become a regular on the nationally-syndicated Bob & Tom radio show, and was honored as one of the top 21 club comics of today at HBO’s Las Vegas Comedy Festival. We asked him a few questions…

I guess now I would just say true stories about my life, family and sobriety. Or at least that’s how I hope it comes off.

2. Who were some of your comedic influences? What was it about these comics that you admired?

Rodney Dangerfield: Extreme vulnerability. His entire act was taking shots at himself.

Joan Rivers: The definition of fearless. Would rip anyone to shreds including herself.

Bernie Mac: Fearless and honest. Shared a lot of person stories and opinions and did it in a way that was seamless. He created a roll with the audience that never broke until after his performance ended. A true beast who’d attack the stage.

Robert Schimmel: My number one. People told me that I reminded them of Schimmel so I checked him out and he became my all time favorite. He’s vulnerable, often raunchy and always hilarious. Unprotected is one of my favorite specials and his book, Cancer on $5 a Day, is a must read. I don’t know how people see us as a comparison but it’s a hell of a compliment. It’s a shame that out of all the people I’ve mentioned, only one is still around.

3. How has the Detroit comedy scene changed since you started doing stand-up comedy? 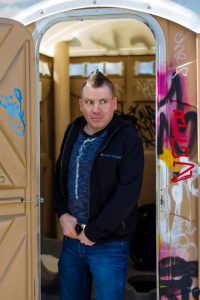 There are a lot fewer clubs but it seems a lot more open mics or “mics” as the cool kids call them. I don’t really feel connected with the scene in the way I did years ago. I’m just a comedian who happens to be from Detroit. Everyone who I started with has either moved away, works the road, gotten famous, or quit. I like being a suburban Dad and the shows I do in Detroit are still always my favorites.

Ten to twelve years ago when I was at Second City, Planet Ant, and doing a weekly show every Tuesday at Joey’s with motor city improv while hosting the open mic before hand was a different time. You’d go to Joey’s (a recently closed club in Livonia, Michigan; there also used to be one in Dearborn) on a Tuesday and it would be standing room only. The room was filled with energy, laughter and smoke. Bill Bushart (Godfather of Detroit Comedy) calls it the golden age of comedy. You could see motor city improv, Martin Butler, Mike Kosta, Vince Averill, Brent Sullivan, Mike Bobbitt, Jesse Popp, Matt McClowry, Nate Fridson, Bob Phillips, Connie Ettinger, Mike Stanley, Heather Jay H etc… All in one night.

Or swing by Mark Ridley’s Comedy Castle and see Brandon T. Jackson, J. Chris Newberg, Ben Konstantine, Jeff Dwoskin…and the same cast of characters at The Ann Arbor Comedy Showcase which, in my opinion, still remains one of the best rooms in the country (as well as the Castle).

(I realized I named a lot of names but all of those people were an important spoke in the wheel of Detroit Comedy. Sorry if I left anyone out.)

I used to run a improv/stand up show at The Village idiot with my wife and Ken Kuykendall, Sebastian Oberst, Sam Richardson (star of upcoming Comedy Central show Detroiters) that would be packed every Sunday. I truly think people were more supportive of it all back then. I realize I’m only talking about a few years ago but everything in our world has changed so drastically in the last ten years that saying “back then” seems apropos.

Also, comedy has changed, and I’ve evolved with it. You have to. I think it’s growing to be more personal than ever and when you’re sharing such personal things, it’s good to have a feeling of friendship and comfort with the audience. Maybe these little mics at bars provide that to the performer and the niche audiences. I think back then people just wanted to see a comedy show and now that want to see someone they know. I can’t blame them, it’s their hard earned money, but there are a lot of great comics people don’t know exist.

4. You were a finalist on Season 8 of Last Comic Standing. Can you tell us a juicy behind-the-scenes story?

I actually had to sign a contract, so I’m not sure what I can say except I got kind of screwed over on a very national level because Roseanne didn’t get a joke. I was moments from what I considered to be the biggest break a comic could get to being in the basement of a theatre in Los Angeles talking to a counselor who wouldn’t release me until they were sure I wouldn’t harm anyone or myself. They did this with everyone; they have to protect themselves and I get it. It actually messed me up pretty bad after and I had an alcohol relapse that I’m not proud of at all. Fortunately it was just one.

I’m just surprised that Rosanne apologized to Ben Kronberg when he told her to get fucked, but she just continues to hate me over a joke she didn’t get. And I think she got it, she just got butt-hurt about it. But I love Wanda Sykes and Page Hurwitz, who got me on the show and now that time has passed I realize how lucky I am for the exposure. I got to be in Los Angerles for weeks filming a reality TV show. How many people can say that? Yeah, a lot. You’re right. But not a reality show about stand-up!

5. You’ve performed on television several times. Do you have to do anything differently to have a successful television appearance?

It’s really just all about pacing and having tight jokes. I love Gotham Comedy Live on AXS. I’ve done it three times and one other time when it was on Comedy Central. I love it because it’s just a club set In one of the best rooms in the country. It’s the perfect TV show.

6. Can you describe your writing process? Where do you come up with ideas, and how do you flesh them into jokes for your act? 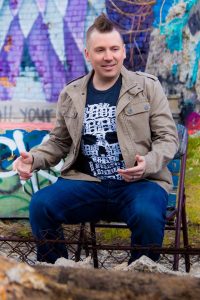 Pretty simple these days. I tell a story until it has a lot of punchlines and a big ending. I work it and work it. I don’t record anything, if it’s good, I’ll remember it. Many comics disagree with me on that and I don’t care. It works for me. Worry about you.

I also sit down and write jokes everyday. It’s important to flex that muscle. But I’ve been arrested 13 times, I’m a recovering alcoholic and addict who has a family and I find that the more I open up about my demons and just my life, the more people relate. I feel like I’ve finally found my voice. In the words of Miles Davis, “Man, sometimes it takes a long time to sound like yourself.”

7. Tell us a comedy lesson that you learned the hard way.

Don’t insult the audience for showing up. Don’t go up when only seven people show up and say “we could do this in my car…or my living room.”

Give people a unique show and progress the art form. Doing shit anybody can do doesn’t make you a talent, it makes you a hack. I was a year into comedy and I did that while MC’ing. The headliner was Henry Cho (I ended up doing warm up on his Comedy Central hour a few years later) and he said “Jerry Seinfeld once told me, don’t insult an audience for showing up. Treat them like a packed house.” He was right and it’s always worked for me. Respect your audience.

8. What are you working on currently?

I’m at The Funnybone in Richmond, Virginia — a club I absolutely love. Jason Dixon (a former comedian and a really good one) is the manager and he really makes it an artist and audience friendly atmosphere. I hate to keep using the word “artist” because I don’t really consider myself (or most comics) artists at all, but I’m really getting tired of seeing the same stuff all the time. If it’s truly an art, we need to keep evolving and progressing. Dumping on whatever is popular to dump on takes absolutely no guts. And we get it, you could do the show in your car, you’re the only chip in the cookie, this person learned to whisper in a helicopter… Have some standards or it’ll never get better and people will grow tired of it. If they already haven’t.