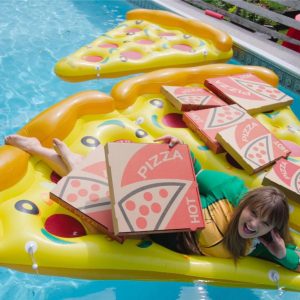 Hamtramck comedian Lauren Uchalik has been performing stand-up since 2011. She’s performed all over the country, from New York City to Chicago. This year, she’ll perform at Indiana ComicCon, Grand Rapids PotterCon, and Detroit PotterCon. We asked her a few questions…

I try to combine real life topics that are unique to me that also have an element of relatability. I’m a little goofy and have been told that I remind people of their niece that they don’t talk to that seems to be having a pretty good time on facebook.

2. Who were your comedy influences?

I have pretty broad comedy influences. Anjelah Johnson’s first Comedy Central special, That’s How We Do It, was one of the first specials that I remember watching and thinking, “I love her storytelling.” It was personal and engrossing without being gross and shocking for no reason. She was talking about her family and her own life.

I was a big fan of Chris Eliot and his sitcom, Get a Life, as a kid because he really tested how much absurdity an audience would pay attention to. Janeane Garofolo, Stephen Colbert, and Tina Fey all have great writing styles that are incredibly relatable but also offer commentary on important issues. I try to think of them when I’m having a hard time phrasing my own takes on things.

3. You host an open mic at The Painted Lady in Hamtramck. What’s the biggest challenge when hosting an open mic?

A lot of the challenges depend on the location. The Painted Lady is a valuable venue because the audience really makes you work for their attention. They blatantly talk louder if you’re not interesting to them and they aren’t scared to heckle. Running a mic takes a combination of understanding the value of the venue, the comics, and the crowd. When I started this show in 2011, the crowd there was a little different, but the vibe keeps comedians on their toes.

4. You’re also an avid roller derby player. Tell us about that.

I started playing roller derby in 2011, when I moved back to the Detroit area after college. When I was in college, I worked as an extra in the movie Whip It!. I thought roller derby was pretty cool, but I couldn’t fit it in my life then. A regular customer at the Starbucks where I was working was a player, and she encouraged me to try out — and even offered me a pair of her old skates. We came up with my derby name, “Wham!tramck,” while I was working at Planet Ant Theater. I grew up in the city of Hamtramck, and it’s always been hugely important in my life. Since then, I’ve served as the league’s PR and marketing director, as well as the PR director for an international tournament that came through Detroit in 2015. It’s really empowering and it helps to give my life balance, since comedy is so male-heavy. It’s nice to have a women-powered time in my life too.

5. Tell us about a favorite moment from your comedy career.

Last year, Iliza Shlesinger invited me to do a guest set at one of her shows at the Comedy Castle. Anjelah Johnson was performing down the street at the Royal Oak Music Theater. It was such and amazing, girl-power comedy moment to be able to talk to and perform in front of them at my favorite venue.

6. You’ve been a big part of organizing comedy events, including Detroit Comedy Underground and other projects. What advice would you give to other comedians who want to produce shows?

Don’t just start a show because you’re not getting stage time somewhere, and don’t assume that because you can run a show, people should book you. I started running Painted Lady a few years in, and I made some choices that, in retrospect, were really dumb : the frequency of the show, the length of sets, the number of comedians, etc. Now, after more experience, I produce a show that runs a much better and makes for a more cohesive event. If people aren’t booking you, it’s easy to assume it’s because of some personal thing, but take it as an opportunity to analyze your own craft.

7. Over the years that you’ve been doing stand-up comedy, how has your “voice” evolved?

I’ve always steered towards dark humor. My first sets had much longer jokes, and I’ve whittled a lot of those down over the years after experimenting and watching more comedy. I’ve gotten much more comfortable with talking about vulnerable stuff on stage as well; I used to close with a street joke, and I cringe about that, but at the time I thought it was great. I’m now trying to write more jokes about current political events that are both important to me and done in a unique way. I’m frequently going to open mics where you hear ten comedians with the same general premise, so I’m trying to craft my jokes in style that stands out.

I’m one of the producers of the upcoming Motor City Comedy Festival that’s going to take place throughout Detroit on September 21-24, 2017. We’re hoping to make it an annual event that can show off the great venues and the entire city to comedians from out of town. We want to show our audience how much great live comedy there is out there. I also have a web series in production about bad dating experiences called Red Flags that’s going to be released in the next couple of months. I’m also always available for voiceover and writing work for anyone who’s looking!

EXTRA CREDIT: If you could create a roller derby team with any celebrities you wanted, who would be on your team?

So, a rule up front: this is based on the assumption that all these people can skate and can hold their own on skates: