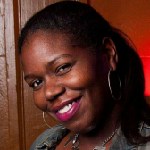 Detroit native Melanie Hearn has been doing comedy for nearly three years. In that time, she’s had the opportunity to work with Faison Love, Lil Duval, and J. Chris Newberg. We asked her some questions.

The best way to sum it up: I’m saying what other people are too polite to say; I’m a high energy storyteller; my comedy is based on real life experiences.

Chris Rock, Bernie Mac, Sommore and Joan Rivers, just to name a few. Bernie Mac was fearless. He wasn’t scared of you…we all know the rest. Bernie Mac brought the Southside of Chicago to the world. He didn’t try to adjust to the world; he made the world adjust to his style.

Chris Rock inspired me because he could talk about anything and make it funny, but he also pushed me to think past the joke. He took truth and made it funny.

Joan Rivers was one of the first white female comedians I saw that was as ballsy as the men. She had a quick wit and, frankly, just didn’t care what she said and never apologized.

My all-time favorite is Sommore. She was the first black female I saw that was smart, sexy, and funny. Sommore talked about her sexuality in a much different way. She wasn’t ashamed of doing her own thing. Her style was real and raw. I remember thinking to myself, “This woman dominates the stage like her male counterparts, but does it with style.” Her appearance was always impeccable on stage. See, what I’ve learned from all these people is that comedy is about being true to yourself, not being scared to take risk.

3. Tell us about your favorite moment of your comedy career so far.

I’m far from a star but my favorite moments are when people remember me from a show and they quote one my jokes to me those are the best moments in comedy.

4. Tell us about the open mic you and Heather Jay are running at Punchline in Southfield. What have you learned about getting an open mic off the ground?

The Jingle is something Heather Jay and I came up with, hoping to bridge the gap in comedy. Unfortunately, in a lot of comedy communities there’s a disconnect between mainstream and urban rooms, and that’s something we were looking to change. The Jingle is a place where everyone can come together and work out new material. It’s a place where comedians can network and build relationships and really continue to build our comedy community.

Getting an open mic off the ground takes a lot of work, especially on a weekly basis. You have to constantly promote and fill the seats, as well as making sure you have enough comedians to perform. I’m learning how to work with club owners and understanding the business end of comedy.

5. You’ve performed very well in a number of comedy competitions. How do you think about competitions? Do you approach them differently than other performances?

I’ve slowed down a bit in competitions only because they can be a bit stressful, especially when it’s an audience bringer show. I weed them out based on the prize and how the winners are chosen. I’ve been involved in quite a few, and sometimes they are not so friendly; I don’t like the negative energy that some can produce.

I approach a competition just like I would any other show. I treat every show the same rather it’s a competition or showcase I believe in doing your best no matter what type of show.

6. When you sit down to plan your shows for the upcoming week or month, what is the process? How do you find places to perform?

I don’t really have a concrete process. I typically plan by the week and when I’m not booked I make sure I’m at an open mic working out my new material. A part of the booking process is that when I’m not booked on a show, I hang out at other comedians shows if they see you supporting they might be more prone to book me next time because they know me. Networking is huge part of the comedy game.

7. As you first started doing comedy, what were the goals that you set for yourself? What are your goals now?

When I first started doing comedy, my goal was not to bomb! I wouldn’t say my goals have changed; I’ve added more to them. My ultimate goal when starting comedy was to make comedy my career — not a job or hobby, but actual career. That goal has not changed but alongside stand-up there are so many opportunities in the comedy arena, so now I’m more open to exploring other comedic avenues besides stand-up.