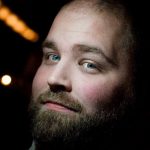 For years, Detroit stand-up comic Wes Ward has performed at comedy clubs across the midwest. He was a finalist at the Border City Comedy Festival and is a frequent performer at Laugh Fest. We asked him a few questions…

I’d describe it as relentless. I’m a loud dude in general and on stage I amplify that — figuratively and literally. I try to pack a lot of punchlines into my set so that there isn’t a lot of room for looking away. I came up in some really tough rooms where I had to fight for attention so it only makes sense that it carries over into my professional act

And they inspire me for different reason. Attell, Mulaney, Glaser, and Kinane all have this anything for a bit attitude. Their style never lets up. Its some set up and a lot of punch. I enjoy that. Chris Rock I enjoy because he can take issuses that are heavily political or societal and still turn them into hilarious bits. He’s fearless.

3. Tell us about your favorite moment of your comedy career.

I have a couple of moments. My favorite moment selfishly is opening for Kyle Kinane. I thought I did well that night. And all of my friends and family were there. I got to share that moment with Zach Martina, who hosted the show. I ended up getting drunk with Kyle and ordered $25 in Taco Bell. First time I ever remembered ordering Taco Bell while being drunk. The night I got to emcee for the first time at the Comedy Castle will always be special because it was an acknowledgment that I had at least made Mark Ridley trust in me enough that I wouldn’t ruin the show.

4. Tell us how you work out a new bit onstage. How do you know when a bit is hitting right, when it’s got potential but still needs work, and when it should be scrapped altogether?

I can’t really write stuff out. It sounds too much like Im reading on stage when I do that. So I usually think of a bit or when something crazy happens to me I write out a line or bullet points. I then think of an outline to the joke and work it to death at open mics. If that bit is getting laughs, I work on it some more. Sometimes up to 4 or 5 months. A bit to me is dead if I’m getting silence after 4 or 5 open mics. No laughter means the bit sucks. After I have what I think is a bit that is working, at my next paid gig I try to sandwich it into a bunch of solid material. This way, if it fails I know it’s trash. If it works I try to open with it the next time. I think almost every bit should be able to close or open your set.

5. You help book the comedy shows at Lynch’s Irish Tavern. Tell us about that show.

It’s a traditional comedy show with a headliner, feature, and emcee. I started booking it last year with help of the owner. I try to look for comedians who will resonate with the audience at Lynch’s while simultaneously not offending my own tastes. I’m proud to say that Lynch’s is the home of a lot of first paid gigs and I’m proud to be able to be in a position to give people that opportunity.

6. What are some things that new comedians do that would make you less likely to book them?

That’s a good question. I can’t think of anything egregious that new comedians do that can’t be fixed with more stage time and experience. I try not to judge too quickly when I see someone at an open mic after their first few times. I mean, I was awful the first 3 or 4 years of stand up. I guess if I’m looking at it from a booking perspective not showing respect to your fellow comedians is a red flag in my book. Talking during a set or even heckling is something I can’t believe I have to bring up. Believe it or not I have seen newer comedians heckle other comics on stage and that is an automatic strike.

7. You’ve performed at a lot of open mics over the years. What are the qualities of a good open mic? What advice would you give to people running open mics.

The best open mics are most likely not completely open. Two I can think of — Mac’s in Lansing and Louie’s in Kalamazoo — are actually pre-booked open mics, if that make sense. Both rooms do a great job of balancing newer and polished comedians so it keeps the lineups fresh and also keeps the audiences coming back. What makes an open mic good are a host that cares and a venue that cares. If those two things are in place then the open mic should be a great experience.

I have a weird twitter account you can follow called Rodney2010s. It’s basically a parody of Rodney Dangerfield if he were to be a millennial. The handle is @rodney2010s. Besides that, just on the road doing this comedy thing a whole bunch.