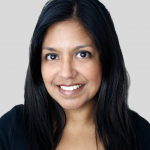 Esther Nevarez is from Waterford, Michigan and has been doing comedy for eight years.  She has performed in various festivals including The Boston Women in Comedy Festival and New York City’s Laughing Devil Comedy Festival.  She also co-runs The Jester Comedy Show in Hamtramck. I asked her a few questions…

I hate describing my comedy! Most people say, “you’re so quiet, I can’t imagine you doing comedy.” I talk about traits of myself, stories, and observations. I like to have fun on stage and bring the audience into it.

My friends Rio Scafone and Pete Condit were running an open mic and comedy room in Madison Heights called the Santa Maria. I worked the door and DJed (just played music) there and met all the comics. I loved talking to them and ended up trying it there and hosting a show. It shut down so I didn’t continue. Eventually my coworkers and I decided to take improv at Mark Ridley’s and when I signed up, my coworkers did not. Awkward. I stayed in the class and most of them were also taking the stand up class with Bill Bushart so I took it as well.

3. Who were your comedic influences?

My family and friends are super funny. I’ve always admired their quick wit and ability to tell stories.

4. You describe yourself as a “Mexican unicorn.” Explain what you mean by that.

I have a joke about being bad at being Mexican and comparing my life to traditional Mexican American culture and how I’ve kind of let it down. It stems from having many friends scold me with “Bad Mexican! Bad!”

5. You’re a member of the Laugh Riot Dolls. Tell us about that.

Heather Kozlakowski is the founder of The Laugh Riot Dolls. We were in an all female group before that and after that ended, she started her own group. I’ve been lucky enough to be a part of her photo shoots and such to help promote and market the group. They’re super fun shows to be a part of.

6. You host an open mic night at Trixie’s in Hamtramck. What do you learn from running an open mic that you don’t learn by just participating in them? Give us some tips on running a successful open mic.

I’ve learned to not feel as awkward talking to a cold room and I’ve gained motivation to try new jokes because I don’t want to repeat the same jokes every time. As far as tips, I do a show up, go up open mic, which means anyone can show up on the day of, and sign up, so I’ll talk from that standpoint. Don’t do too much time up top. The audience is mostly comics and their main concern is going up so they want that to start as soon as possible. Don’t give each comic too much time because additional comics walk in throughout the show. And if there’s audience there, they’ll be happier with comics changing out quickly in case they aren’t enjoying someone. It keeps the energy of the room up.

I personally don’t do time in between comics either. I just like to keep the show going and I try and do the impossible, I try to get comedians to have fun at a show up, go up open mic. I know that’s weird and unconventional, but I’m trying to push the envelope.

When I started there were mostly clubs and open mics. There were a lot less showcases. And the senior comics were a little harder on the “open micers.” It’s cool to see a lot of comics running shows and going up a lot more often. When I started there weren’t a hundred people watching comedians in a wrestling ring in a huge recycling warehouse in the middle of Detroit or guerilla comedy for a ten year old in an ice cream shop. It’s gotten weird but it’s a good weird.