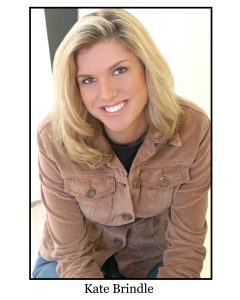 I would describe my comedy as silly, sarcastic, and observational. I make fun of everyday sort of things, and I joke about my family quite a bit, too.

I like to challenge myself, so I often find myself doing things that scare the living crap out of me (although I’ve yet to skydive). Stand-up comedy was one of those things. I figured I would do five minutes at an open mic, and after throwing up from nerves, check it off my bucket list. I never imagined I’d get hooked, but that’s exactly what happened.

3. Who are some of your comedic influences?

My favorite comic of all-time is Ellen DeGeneres. I remember watching her stand-up as a child in the 80s, and I continue to laugh and be inspired by her. She has the ability to make any topic relatable and hands-on to the audience. She brings people together, and I love how silly she is. My other comedic influences are road comics who I’ve worked with over the years. They might not necessarily be famous, but they’re hilarious. And I admire anyone who is willing to drive halfway across the country to tell jokes because they love it!

4. You just graduated from law school. Congratulations! How do you balance a legal career and comedy?

Thank you! Balancing the two has not been easy, especially when I was still in school. I remember many times driving to gigs while simultaneously listening to lectures in my car (and taking notes on top of my steering wheel).

Animal rights/welfare is one of my other passions in life, so I plan to get a job where I can work to secure greater legal protections for animals (fingers crossed!). But, I love stand-up so much, and I can’t ever imagine my life without it. So, I’m sure there will still be times where I’m driving back from gigs at 4 a.m. so I can make it to my “day job” at 9 a.m. I’m just hoping the rest of my career will no longer involve taking notes on the steering wheel.

5. You pride yourself on not covering stereotypically “female” topics in your act. Can you talk about that? 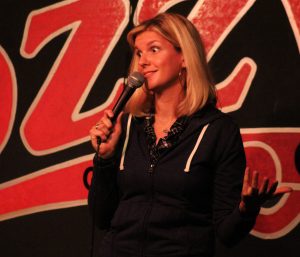 Sure. I am very much a feminist (and I actually studied women’s and gender studies in graduate school), but I think that comedy should touch upon experiences we can all relate to. I don’t see the point in any comedian bashing either men or women (or any group of people, for that matter). I’d much rather discuss topics that can connect the audience. There’s far too much in the world to make fun of without having to resort to relying on stereotypes.

6. You describe yourself as a “passionate activist.” What are some of the issues that you are involved with? How does this affect your comedy?

I am very interested in drawing connections and forming alliances across various political and social justice issues. I am interested in human rights, animal rights, environmental and economic justice, and I have been personally involved with those movements. I am currently very active in the animal protection movement, and I serve on the board of directors of Attorneys for Animals.

My involvement in activism affects my comedy because it provides an outlet for me to laugh and not be so serious. Being involved in social movements makes us confront a lot of injustice, which can get extremely frustrating and depressing. For me, being inundated with stories of animal abuse, racism, sexism, homophobia and the like makes me need an escape. So, I think comedy provides that.

7. There seem to be far more aspiring male comedians than female comedians in the Detroit scene. Why do you think that is? What advice would you give to up-and-coming female comics? 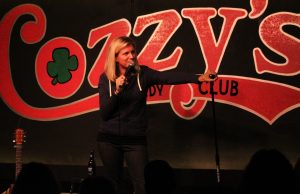 Oh man, I could go on about this one for a long time (and I actually researched and gave a presentation about this topic when I was in graduate school). I think it has a lot to do with the way girls and boys are raised, and in society in general, humor seems to be more valued in boys whereas beauty seems to be more valued in girls. I also think the road presents some unique challenges for women, such as driving home late at night from gigs and staying in comedy condos with guys you’ve never met. I feel like those can often act as a deterrent for female comedians.

While it’s been great to see more women performing in Michigan than when I started, we still need more. So, as far as advice goes, I would say to stick to it! Keep hitting the open mics, keep getting stage time, and keep on doing what you love!

I have some great roadtrips planned. I am renting a car and driving around Iceland for a week, and I’m going to try to see if they have an open mic I could hit up. After that, I’ve got some gigs around Vegas, and I’m excited about those! My plan is to write more, make some travel videos of my upcoming trips, oh, and study for the bar exam!