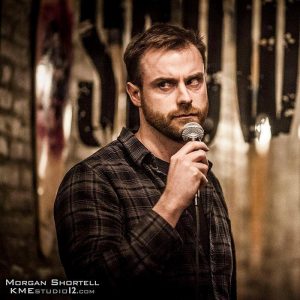 Stand-up comedian Matt McClowry hails from Dearborn, Michigan. In his 13 years of comedy, he’s appeared on the AXS TV series Gotham Comedy Live and Laughs on Fox. His album, Uncomfortable, can be heard regularly on SiriusXM. We asked him some questions…

Mediocre. I hear things like “smart,” “dry,” “deadpan,” “dark,” and “good writer.” I don’t know how true any of those are. Corey Hall wrote a thing about me once where he said I have “a laconic yet still faintly annoyed delivery underscoring sharply observed gripes about a host of modern absurdities.” That’s probably my favorite description ever.

In 2004 I signed up for the open mike at the Comedy Castle and got on and did it. I forgot the awful routine I wrote but midway through was the first big laugh I ever got: telling the audience I wanted to blow my head off right there. So I found my voice right away.

3. As a child, you were diagnosed with Asperger’s Syndrome. How does it influence your comedy and your career?

It is generally an enormous hindrance, both artistically and professionally.

Artistically: While I suppose my delivery and body language give me something of a unique presence, my sense of humor is generally really esoteric and dark, so I find it incredibly hard to develop material that I think is worth a damn that anyone else likes. I self-censor a lot and overthink and sap the fun out of everything.

Professionally: Because of how much of this business is composed of networking and the fact that I am absolutely horrific socially. I am the definition of a bad hang and I have zero handle on the business side of things.

4. Do you worry about being defined by your Asperger’s Syndrome?

I am in a weird middle area where people think I am making it up when I talk about it or want to know what’s wrong with me if I don’t. I have always vacillated between whether I should focus on it more or not mention it at all. It is nice to have people define you by anything, but fortunately or unfortunately, I’ve found I am not going to be able to get anywhere playing that card even if I wanted to. I guess I have always dealt with it by addressing it midway through my act, so people get to know me as something else before I bring that into it. It’s nice to hear from people after shows who have it or know someone who does and are able to draw some inspiration from it, and I’m always going to bring it up because I am always going to think of funny things here and there about it, but it’s not and will never be my focus, so trying to be “The Aspergers Guy” is a terrible fit and a non starter, career-wise.

5. Tell us about going from Detroit to Los Angeles. What advice would you give to other comics thinking about making the move?

I moved from Los Angeles after living in New York for almost two years. It was tough because I had been doing comedy for ten years and was getting burned out. I thought New York would reinvigorate me, which is the exact opposite of what happened. I’m in my thirties, I’m tired, and I hate cold weather. New York has the best comedy scene in the world and a lot of great comics who I like a lot living there, but it’s just not for me at this point in my life. Moving to Los Angeles from New York felt like taking my first breath of air after being suffocated. Just from a day to day living standpoint, I enjoy living in L.A. exponentially better. Comedy-wise, I have yet to throw myself back in full force but I will.

Advice? Odds are you are going to need to move to New York or Los Angeles if you want a career in comedy. Visit both of them and spend enough time getting familiar with them to really get an idea of where you want to live. Living in New York isn’t for me but a lot of people love it. A lot people hate L.A. but I like it.

Don’t fret too much about being “ready.” There are several comics who are hot in the industry right now who basically started there. You are going to need to hustle and you need all the enthusiasm for comedy that you have, and that is going to wane over time, so move while you still have some fire in the belly. For example, I should have saved more money so I could keep going on the road. I did other jobs so I could save money and be in the city, but they just sapped my energy. Then I wasn’t going out and doing long sets in front of regular audiences as much as I used to. On the other hand, if you do comedy on the road for too long you can develop some habits that help you crush but also make you blend into the pack. There should be a balance.

6. You recorded your first album a few years ago. Tell us about that process. What advice would you give to other comics looking to record an album?

I was offered a deal to record an album. I was happy with my it because it made sense for me financially at the time. I didn’t have to foot the bill for any of it, I got work in a new club because of it, and airplay has gotten me exposure and residuals. I had forty-five minutes of material that wasn’t getting any better so it made sense to record it. I am fine with how it came out, but I would not do it the same way again. If it makes sense for you to record it yourself, go ahead. A first album is a first album. Do the best job you can but if it’s not perfect, you can do another one later. That was a long, rambling way of saying, “I don’t have any advice.”

I did one where a very talented comic got eliminated in the semifinals but was offered the vote tallying spot for the finals. He proceeded to kill harder than I’ve ever seen anyone kill, run the light, order a drink onstage, mock the comic who he lost to, left to a damn near standing ovation and told the judge’s table to get fucked, then walked out of the showroom like an old west gunslinger. Easily that. Two of my best friends were there and he became a legend among the three of us.

As far as performing, it’s all the same. There are weird venues sometimes, but audiences laugh at the same stuff anywhere, basically, only the references are different. I will say that there are comics who I’ve done contests with who have gotten more out of them in the long run than the people who supposedly won. So while you’re trying to have the best set for the crowd, that may not be what the industry people at the festival will be looking for.

EXTRA CREDIT: If you could invent a new sport, what would it be?

Competitive Deductive Facebooking, where you read someone from high school’s posts and try to figure out what the hell went wrong in their life. That’s really more of a game show thing.