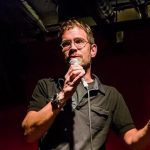 Stand-up comedian Adam Sokol hails from Walled Lake, Michigan and now resides in New York City. He’s been practicing his craft for over a decade, so we asked him a few questions…

I would chastise somebody who hasn’t seen me for having not seen me. Then I would tell them to come out to see me. I hate describing my comedy. I’ve never heard anyone describe their own comedy and not sound like an asshole. So I guess my comedy is a guy who’s funny who does not like sounding like an asshole.

2. Which stand-up comedians influenced you?

There are a bunch of comics I like. Probably mostly the same ones everyone else mentions, but really the comics who have influenced me the most are the people I see day in and day out. Chris Rock isn’t watching you at an open mic or at a show your friends are. Talking with, watching, and being watched by my friends. That’s been the biggest influence I think.

3. You now live in New York City. Tell us about your decision to move out there. What advice would you give to other Michigan comics thinking about making the same move?

It just seemed like the next step. Whether or not I was right, who knows? Everyone’s experience is so different any advice will probably be wrong. Save up and be prepared for it to suck. Because it’s very expensive and it will probably will suck.

4. How is the New York comedy scene different from the Michigan comedy scene? How do you map out a typical week or month?

Size is the biggest difference. It’s hard to stress just how many comics there are. Hundreds of thousands and it’s growing everyday. Some of them are even funny. Regardless, it’s not sustainable. It’s easy to fall into routines. That’s something I struggle with. I find some shows and mics that I like and I go there too often. I don’t do a whole lot of mapping out most weeks. If I don’t have a show on a particular night I’ll try to find a show that a friend is on or one close by. There’s always a mic to do before or after. I really fly by the seat of my pants. Maybe I should map it out more.

5. You blog regularly. Tell us about that. Has it had an impact on your comedy career?

I do. Not as regularly as I should or ever intend to, but I try to do it pretty frequently. I can say that, like most things, my blogging has had absolutely no impact whatsoever on my comedy career. I got an offer to headline a college once from a guy who knew me only from my blog, but then he got weird and angry when I followed up on his offer. It was bizarre.

6. You have an interest in politics. What are your thoughts on the intersection between politics and comedy?

It’s like anything else in terms of comedy: When it’s done well, it can be great. More often than not, it’s just another douchebag on stage saying that he doesn’t like Trump and waiting for an applause break. I do like politics. There’s just so much shitty political material out there right now that unless whatever I have to say is heads-and-shoulders above everything else, I usually leave it on the proverbial floor.

7. In addition to stand-up, you also do a lot of comedy writing. Tell us about that. What advice would you give to aspiring comedy writers?

I do some. I’d like to do more. I think I’m pretty good at it. I wouldn’t give any advice to aspiring writers aside from, “Constantly be writing.” But any other advice would ring hollow on account of how little I make doing comedy writing. If any comedy writers have advice for me though, I’d gladly take it.

I’m slowly watching for the first time and reviewing Star Trek: The Original Series. I’ve been a Star Trek fan since I was a kid, but have not seen too much of TOS. It’s not a particularly good show, but I started doing that a few months back.

EXTRA CREDIT: If you could find yourself in the plot of any Star Trek episode, which one would it be and why? What would you do in that episode?

A lot of my favorite episodes are ones where bad stuff is happening to the crews, and I don’t really think that I’d do all that well in a wartime scenario. Maybe the Deep Space Nine episode ‘The Visitor,’ but even though that’s one of my favorite episodes of all time, I’m not really interested in watching my dad get lost in subspace a bunch of times and then killing myself. So I guess I’ll say, ‘Take Me Out To The Holosuite.’ Another DS9 episode, and one of the few holodeck episodes where the holodeck doesn’t go apeshit and try to kill the ship. In the episode the DS9 crew plays baseball against the Vulcan crew of another ship. It’s a fun episode. I like Star Trek and I like baseball. I’m not good at baseball, but I’m sure I can play well enough to lose to a bunch of Vulcans. So that one.