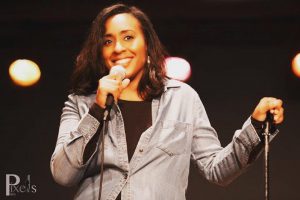 Detroit’s Heather Jay is not just a traveling stand-up comedian, but also a playwright and an author. She just published her new book, Maybe Shorty Should Be A Detective, which is now available on Amazon in paperback and Kindle.

Autobiographical, honest, and something you need to see.

By association. I made friends with some comedians back in 2005. They turned me out. By ’06, I was on stage.

3. You grew up in Detroit. How does the city shape your comedy?

It’s made me fearless. It’s a murder capital. Making a crack dealer laugh gives you an invincible feeling. The crowds have high expectations which only makes us better comedy writers and there are so many characters here, there’s no shortage of material.

4. Tell us about your new book, Maybe Shorty Should Be a Detective. 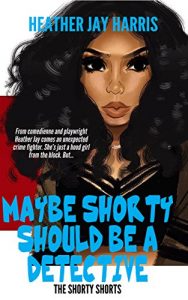 I’ve always been a fan of detective novels and I decided to try my hand at writing one. I wanted to create a protagonist that represented where I was from, so I chose an urban “hood” girl as my detective. Feminism, Girl Power, and Black Girl Magic frequently tend to exclude the ‘hood girl and I wanted to show that she was just as capable as Miss Marple, Jack Reacher, The Women’s Murder Club, and Alex Cross — if not funnier. My Shorty likes to fight, lives on the block, and has a baby daddy in jail. But still, she’s dope.

5. Tell us about your comedy writing process.

I don’t have a formal process. I’m an over thinker and if I make myself laugh then I make a note and start trying to craft a professional joke around it. I think my best ideas have all come from my personal frustrations. I’m not a big venter, and I think comedy is probably how I best express the things most people just drink about.

6. You run coaching workshops for other comedians. Tell us about those.

The business of comedy is lot more black and white than the art of comedy. There is logic and method to how we do this year after year. There is a discipline and even a paradigm to successful navigation through this tricky business and if I can save a newer comic one day of anxiety, I am willing to share what I’ve learned mostly the hard way. And it involves a lot of humility and a self-evaluation. And I came up with a formula to minimize bombing.

7. What marketing advice would you give to up-and-coming comics?

Don’t limit your voice to amplified sound. Your voice can be a blog, a status, a podcast etc. Find opportunities to be heard and then be appropriate for that medium. You never know where your next fan or admirer may come from.

2017 is devoted to my trilogy of detective novellas. I’ve also written two scripts that are in production. And as always, trying to be on the road slinging jokes and (now books) as much as I can.

EXTRA CREDIT: If you could host any TV game show, which one would it be? Why? Who would you like to see compete on it?

Double Dare. And I’d love to see the Senate and the House competing just to watch them all get slimed. OR OR OR The Price is Right…with Michelle Obama, Melanie Trump, Jennifer Aniston, Rosanne Barr, and Oprah.