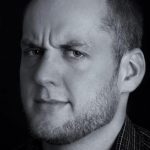 Adam Degi got his start in Grand Rapids, Michigan, where he won the Funniest Person in Grand Rapids Competition in 2009, was a semi-finalist in the Comedy 10K in 2014, and was featured on the Cover of Revue magazine. He has since taken his act to clubs, colleges, and festivals around the country. He has even hosted a game show and once got a standing ovation from the Harlem Globetrotters. We asked him some questions…

I think I’d describe my comedy as unapologetic, self-deprecating, and at times unpredictable. I talk about topics across the board and there’s really no set order, transition or method to the madness. I could go from a joke about police brutality to a joke about pooping in my backyard. I like to walk a think line between being and idiot and being clever.

I got started the same way a lot of comics do: I was the class clown, voted ‘Class Comedian,’ blah blah blah. I worked at the B.O.B. in Grand Rapids, a “big old building” with a comedy club on the third floor. I’d get out of work and the MC at the time would ask if I wanted to do time. I’d get on stage in my chef jacket. I was a better comic than I was an employee — and I wasn’t that good of a comic.

3. You also do sketch comedy. How is writing and performing for sketch comedy different from stand-up comedy?

Writing sketch comedy is a lot different than writing for stand-up. There’s a lot more variables involved; sometimes you’ll write a joke and realize it would be better as a sketch idea and vise versa. Performing sketch, you can do it over and over until you get it right and edit it. Stand-up is live and there’s no do overs until you’re on stage again, so people see the evolution of a joke from the very beginning. Sometimes the beginning is not very good.

4. Tell us about your writing process.

My writing process has never been planned, really. What I mean is: I’m not very good at scheduling a time to write and then actually being productive when I sit down to do it; it feels forced to me. I can sometimes come up with new tags and help with premises in a group setting, but probably 98% percent of my jokes have come to me when doing something else…or trying to sleep. I will say that the constant pressure to come up with funny Facebook posts and tweets has inspired some jokes. It doesn’t always translate from social media to the stage, but I’ve been able to make it work with jokes that get a good response.

When performing at colleges, I find myself trying to adapt too much I think. I’m 32 now and nothing makes me feel older. For the most part, I feel like can still relate to a certain extent, but there’s definitely some references that go over the college crowds heads just because of the age gap. I think the PC culture has changed things as well. I don’t personally do anything that I think would offend college students in 2017 but it’s something I keep in mind.

If I had to choose, I’d pick a club. I think most comics would. A club crowd is always a lot more diverse, unless you’re in a rural community. When that’s the case it’s going to be a lot of old folks that lean to the right and may be conservative. Fortunately, most clubs are not in those areas. If I had to choose between 18-22 year-old kids who are considered sensitive and PC or old white conservatives, I’m picking the kids every time.

6. What advice would you give to younger comics about how to deal with hecklers?

If I had to give advice to young comics about hecklers, I’d probably say don’t split the room. In my experience you just want to be mean enough to get them to shut up then leave alone. It’s definitely a lot easier when the heckler is a male, the audience seems to have less sympathy for them. You may not want to dabble to much into insulting them if you’re not ready or not that great at riffing — it could kill your momentum and ruin your set. I can honestly say that I’ve never lost to a heckler; they’re all really stupid and you have a microphone. Everybody else wants them to shut up as much as you, so it’s pretty easy for the audience to take your side; sometimes a good in-the-moment laugh can improve your set. You just don’t wanna keep going back to it and take time away from what you’re trying to do. If the club doesn’t police the room and threaten to kick hecklers out, you could be in for a long night if you don’t leave it alone. You definitely want to have fun with it and take it in stride; if you seem angry, distracted, or intimidated by it the audience will smell blood in the water and it could change the way they feel about you.

7. How has the Grand Rapids comedy scene changed in the time that you’ve been doing comedy?

The Grand Rapids comedy scene has changed a lot since I started. When I first started hitting the open mics at Dr. Grins, they almost had to beg people to do time. Now it’s booked months in advance. I feel like there’s is much more opportunity for stage throughout the week, but there are also a lot more comics. Having LaughFest is town has definitely done a lot for me personally. I’ve had numerous opportunities to open for a ton of great comics from around the country. With that being said, you’re always the local guy, and nobody is every gonna love you where you’re from.

I’ve had a lot of friends move away or quit comedy since I started, so to be honest the scene isn’t as fun for me. We don’t hang out before and after mics like we used to. It feels like the comradery and vibe is different now, but maybe that’s just because I’m older. I’m not as involved as I used to be either: I’m getting married soon and have a life outside of comedy so that definitely makes it different for me. When she leaves me, I’ll be back.

My debut album, His Name Is My Name Too, comes out on iTunes on Wednesday, September 27th. I feel like I recorded it 10 years ago and it’s been a long process without a label for help, but I think it sounds great and I’m really proud of it — especially only recording one set. We packed the club and they turned people away at the door. I’m looking forward to getting the hard copies and getting it on Itunes, spotify etc. Really excited for people to hear it.

EXTRA CREDIT: If you were given a million dollars to invent anything, what would you invent?

If I could invent anything, I think I’d invent something that would improve my vertical by 20 inches immediately. I’ve always wanted to dunk on someone. Just one time, and I want a group of people to see it. Then I could die happy. I had hoop dreams far before I gave a shit about comedy. I hate my genetics.