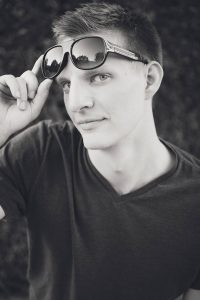 Harry Moroz is a regular on club shows, alt shows, bar shows, TV shows, pretty much any kind of show except a no-show, which he’s never been to. Originally from Michigan, now in Los Angeles, he’s performed in Gilda’s LaughFest, Laughing Skull Festival, Laugh Your Asheville Off, and Riot LA.

It’s like Vince Carter dunking over a 7 foot Frenchman in the olympics, but with cooler kicks on.

2. Who are your comedic influences?

Comedic influences are tough because there are so many, but I really admire and am motivated by acts that are unique because of how true to themselves they are. Patton Oswalt was who really pushed me into starting stand up, but acts like Maria Bamford, Doug Benson, Doug Stanhope, Richard Pryor, Brian Regan, Rory Scovel, Dave Attell, Dave Chappelle, Andy Kindler, Dana Gould, Eric Andre, and TJ Miller (amongst others) – they’re all so amazing and aware of who they are, and they’re true to it. They commit. That’s a big key to comedy (and anything really) is your level of commitment, both in the moment and in the long term. That, and some jokes about genitalia help.

3. You’re a unicyclist. Tell us about that. How has it influenced your career?

As a little lad, I always liked goofy thangs and unicycles fit that bill. I was in a basketball league and showed up early to an 8am game, and the gym was occupied by the RTUC (Redford Township Unicycle Club, for those not in the know, if anyone truly isn’t). They were teaching new members how to ride and working on tricks and I had to get involved. My parents were super supportive, and soon after the whole family joined and started riding. It introduced me to a lot of cool performers, not just unicyclists, but magicians, jugglers, tight-rope walkers, that whole gambit. It was an awfully fun way to grow up. It gave me many opportunities to perform and learn how to put on a show for big groups. I’m not sure if I ever had stage fright, but that lifestyle certainly got rid of any traces of it.

Unicycling has provided me with some good material. Most people never had the experiences I did and it’s silly enough to be an intriguing listen. It also helped land me on a TV show for the first time. I got cast on a Disney show as 14 year old unicycle prodigy. That happened to me as a 28 year old man. I towered over all the actual teenagers on the show, but I suppose it’s easy to suspend your disbelief when you’re looking at a person on one wheel with a helmet.

4. Tell us about Crane’s Comedy Night. How has it impacted your career?

Crane’s Comedy Night is a show I run with two comedians formerly of Michigan (Trevor Smith and Corbin Recke), and Trish Hadley. It’s a monthly showcase (second Monday of the month) in downtown Los Angeles at Crane’s Bar, which used to be an underground bank vault. Honestly, it’s my favorite night each month. Everyone who comes to that bar on that night is there for the show, it’s packed out every time, and the talent we’ve been having on has been stupendous.

Trevor and I had started a few shows in the past, but when Corbin introduced us to his favorite bar in the city (Crane’s), we instantly fell in love – me for the basement, Trevor because they had an arcade system in the back that allowed him to play Burger Time for free. Darren, the owner, had been approached and against having a comedy show there in the past, but he said he enthusiastic we were about how awesome his bar is (it really is the best) and agreed to give us a shot on one his least busy night of the week and we’d see how it went. First show was packed out, the staff loved it, and we’ve been a regular thing since. Corbin, Trevor, and I came up together in Michigan and claim the Ann Arbor Comedy Showcase as our home club, so we do a bit of an homage to it every show – Trevor does an impression of Roger (AACS owner), bringing up the host with Frank Zappa playing underneath. It feels like a little piece of home.

The show was just in RIOT LA, L.A.’s alternative comedy festival, which was a huge deal for us. We got to put on two very fun shows with some of our favorite performers from the year. It’s been a blast to have on both young guys and gals we dig, as well as some more established amazing talents like Todd Glass, Ali Wong, Kyle Kinane, Baron Vaughn, and DJ Douggpound (to name a few). It’s also a thrill to write new material for each show – we have a month between them so it’s a good motivator to get working. Coincidentally, we have our 1 Year Anniversary 3/13/2017, so I’ll fly back from LaughFest in Grand Rapids and get right on that.

5. You’ve worked on Cartoon Network’s Adult Swim. Tell us about that experience.

My work on Adult Swim is actually for editing. I cut for TV and web content, so I landed a gig editing a short by Michael Showalter called Giles Vanderhoot. I actually moved out to L.A. initially to be a movie trailer editor, so it’s nice to have some skills that can land me gigs that are comedy gigs during the day. I got in with that company because one of their employees saw me doing stand up and I told a joke about working as an assistant editor and laying down laugh tracks. He brought me in and I’ve worked with them (Abominable Pictures) on and off pretty regularly for a while. It’s how I met Trish, our co-producer on Crane’s. They’re great; check out Drive Share on Verizon Go90 right now and Mystery Science Theater 3000 when that airs on Netflix in April for other projects I cut for them.

6. Tell us about the web series An Afternoon and your role in it.

An Afternoon is a web series created by Trevor Smith, Chris Raby, and another dude whose name escapes me. It’s like a whole world they created, really, the site does a better job of describing it than I ever could. It shows sketches filmed by a group and also follows them as they film the sketches and are plagued by a menace. I play a bad guy, Pie Guy, who gets off throwing pies in people’s faces. Honestly, it wasn’t much of a stretch for me.

7. Tell us about making the move to Los Angeles. What advice would you give to other comedians thinking about making a similar move?

I moved to L.A. to be a movie trailer editor (there was no industry for it in Michigan, believe it or not), and also to continue my modeling career. YES, I modeled. YES, I had the gaul to continue that path out in L.A. I shortly gave up that aspiration, got fired as a PA from a trailer house, became a video game tester, got fired because I’m not good at video games (and we’ll leave it at that), and started comedy. Then I met a girl who was just visiting Los Angeles, hit it off, started dating her, moved back to Michigan, got very heavy into comedy, then we moved back to L.A. together so I could pursue comedy professionally.

I have an Instagram series, Harry Bein Bad, that I put out (follow me @hrmoroz, all platforms). I also just started a podcast, MorNose with Harry Moroz, where you can hear me put my foot in my mouth on a regular basis. I made this short with Aaron Flohr I’d love to get more eyes on called Fall Freaks. There are a few other projects in the works, as well, but they’re at too early a stage to talk about publicly. And, like I said, check out Drive Share on Verizon Go90 right now and Mystery Science Theater 3000 when that airs on Netflix in April for other projects I cut.

EXTRA CREDIT: If Dr. Seuss wrote a biography of you, what would some of the chapter titles be?