Comedy legend Kevin Hart will shine a spotlight on four Detroit stand-up comedians — John “J. Bell” Bell, Mike Geeter, Jeff Horste, and Alton “Boogie” Williams — on the December 1st episode  of Hart Of The City 2. The television show highlights up-and- coming comics in different cities across America. The Detroit episode, which was filmed at the Jazz Cafe in Music Hall on August 4, will air on Friday, December 1st at 11pm on Comedy Central. 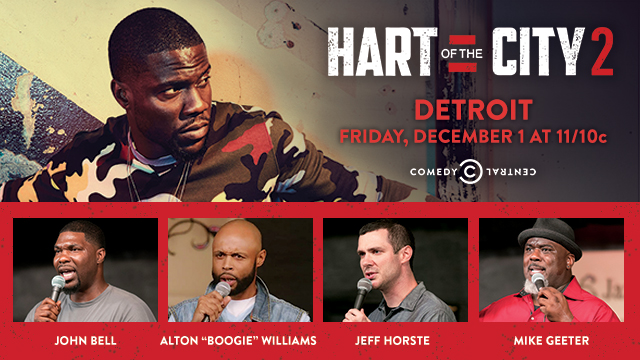 J. Bell, a Detroit native with more than 10 years of experience performing at comedy clubs across the country, currently hosts a Thursday night show at They Say Lounge in Detroit called Open Mind Mic Series, which features comedy, music, and poetry.

Mike Geeter, a Pontiac native who has opened for comedians Al Jackson, Jim Norton, and Artie Lange, also co-hosts The D Brief, a podcast about the arts and entertainment scene. “This is the greatest experience I’ve had in comedy,” says Geeter. “I can’t wait for the world to get a sample of the talent we have in our comedy scene here in Detroit.”

Jeff Horste, originally from Southfield, has traveled the country performing comedy for over eight years, opening for mainstream comedians such as Demetri Martin, Mike Epps, and Michael Ian Black. He has performed in the Boston Comedy Festival, Laughing Skull Comedy Festival, and the Oddball Comedy & Curiosity Festival.

Alton “Boogie” Williams, is a Detroit native that has performed for over 15 years in legendary venues like The Comedy Store and Laugh Factory. Williams has shared stages with comedians Howie Bell, Rickey Smiley, Mike Britt, and Joe Torrey. “It feels unbelievable to be representing my hometown Detroit as one of the up and coming comedians in the game,” says Williams.

A special viewing party will be held at Minnie’s Rhythm Cafe (formerly Mo Better Blues). Comedy fans are invited to enjoy drinks and mingle with the cast of the Detroit episode.

Hear the Comedians Talk About the Show

J. Bell and Boogie joined Mike Geeter and Seth Resler on The D Brief podcast to talk about what it was like to be a part of the show. Listen to the interview (it starts at 38:43):