I’m interested in stand-up and want to start performing at open mics. Do you have any advice for a newbie like me?

My advice is to ask questions, network, and work at becoming a comic before becoming a critic. But I’m also going to hand this question over to some local comics to get their tips. 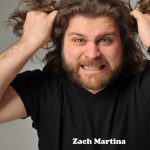 “Don’t run into the trap of treating open mics as a hangout spot. You’ll make friends, sure, but don’t lose focus of your comedy goals. The comics who have their notebooks out before and after their set are the ones who grow.”
—Darnell Anderson

“Try any mic once, and the more you do, the more you’ll come to find what kinds of rooms help you the most and warrant return visits. Never go without a specific plan for what you want to work on, and don’t be afraid to take chances — that’s what open mics are for.”
—Keith Bergman

“Some showcase open mics try to have a mix of experience in their line-ups, so don’t feel badly if newbie spots get filled fast and it takes a little time for an open spot. Also, message the bookers in advance and ask for a spot. We’ve got your back and are excited to see you starting out, just like we did.”
–Amy Probst

“Stay loose and have fun. If you’re having fun, there is a much better chance that the crowd will, too.”
—Alan Black

“Don’t expect to be coddled and don’t invite your family every time. Your friends and family will always think you’re funny to support you; your real trials come from rooms of strangers who don’t even want to be at a comedy show. Be comfortable with silence on stage; don’t let yourself get psyched out because when you’re on stage, all you hear are the silences and when you’re watching other comedians, all you hear are the laughs. Pay attention to what other people are talking about on stage, and try to make yourself stand out.”
—Lauren Uchalik

“Never take any one open mic too seriously. If you wanna do this for real, you’re going to be at bad open mics all the time; learn to have fun in those situations. Learn to bomb well, and make sure you get something out of each set. Other than performing, the initial struggle will be the social aspect offstage. You’re the new person at the open mic, and most of the comics know each other and have developed relationships, so it’s going to seem hard to bust through that. But if you just keep hanging out, don’t be a dick, and you don’t waste people’s time while you’re on stage, the comedy community here is very welcoming and a cool thing to be a part of.”
—Blain Hill

Bill Bushart, the “Godfather of Detroit Comedy,” is a stand-up comedian with 20 years experience. He’s a regular at Mark Ridley’s Comedy Castle in Royal Oak and clubs and bars across the Midwest. Bill teaches the Stand-Up 101 class at the Comedy Castle. For more info, call (248) 542-9900.

Have a question for Bill? Email us.