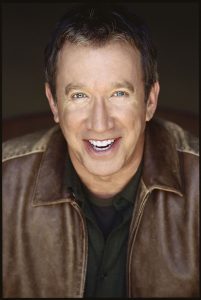 Tim Allen is one of the biggest names to ever emerge from the Detroit comedy scene. Though born in Denver, he grew up in Birmingham, Michigan, and graduated from Western Michigan University in 1975. His comedy career began when he performed at Mark Ridley’s Comedy Castle on a dare. He has since become not only an incredibly successful stand-up comedian, but also a Hollywood star with successful television shows, like Home Improvement and Last Man Standing, and movies, including Toy Story, Galaxy Quest, and The Santa Clause.

We wanted to know more about Tim’s stand-up comedy roots, so we asked him some questions…

1. How did you get started in stand-up comedy? Tell us about your first on-stage performance at Mark Ridley’s Comedy Castle.

I wrote 30 minutes of a bad act in about thirty minutes. I was at least smart enough to save my Pillsbury Dough Boy bit to the end so I left stage with a laugh. Christ…Ridley still owes me 11 bucks! Actually, I have a floor tile I removed with a pocket knife from the waitress station at the original Meeting Place Comedy Club on Orchard Lake Road. It’s framed here in my office.

2. What was the Michigan stand-up comedy scene like when you started?

Busy scene at first, lots of new comedy and lots of good comedy. Dave Coulier was king with his very funny impressions and energy. But so many great, courageous comics going up in front of strangers begging for laughs.

3. Your act is known for it’s signature grunts. Tell us about the history of the grunting.

It’s called a ‘hook’ and it makes ones act and essentially oneself memorable. I did a show for Goodyear Tire in Ackron, Ohio and I was dying. It was a dinner show everyone was eating and mumbling. From stage it sounded like grunting. Out of frustration, I started grunting parts of the transitions between observation so they would better understand my stories and for a spell, they actually got really responsive. I never forgot this moment.

4. When you were young, you were arrested and served over two years for drug trafficking. How did this impact your stand-up comedy?

I bottomed out before comedy and, as a result, before sentencing, I took a leap; I did a new talent night and did well…but I was sentenced to 28 months. During the time away, I read any book on anyone I was impressed with — in and out of comedy. I eventually returned to stand-up the week I got out. Definitely with a razor focus.

5. Tell us about your decision to move out to California. What advice would you give to new comics looking to make the move?

I did road gigs for years and tested both the New York City and Los Angeles comedy scenes. New York City was closer to my style, but the tool shit kinda freaked New Yorkers out. Good advice from a comedy fan back then, Mr. Bob Seger: he told me to make friends with morning radio and it paid off. Back in L.A., I got traction with my act on a morning radio drivetime show in L.A. It took me to another level.

New comics need to focus on getting above the noise however they can. Take some fact finding trips to N.Y.C. and L.A, get a list of obstacles and a list of abilities.

6. You went on to big success in television and movies. When that happens, what happens to the role of stand-up comedy in your career and your life?

It’s all about more attention — sometimes welcomed, sometimes not. My comedy is more adult, so I was in an odd spot filling seats with families due to the material I was getting to do on TV and in movies. But my comedy is really not appropriate for people under 18. This dynamic presented some very awkward initial concert adjustments. I still do a lot of gigs at the Mirage in Las Vegas and a have full tour schedule.

7. You’ve had many successes in your career. Tell us about a project that didn’t pan out but you wish had.

I promised my older daughter we would restore an old firebird together.

8. Your last television show reflected a conservative viewpoint, and there was a lot of political discussion around its successful six-year run and its cancellation. How do you feel about the influence politics has had on your career?

As a general rule, “I exaggerate to clarify.” I search “up river,” if you will, for some version of the truth to make fun. I have found finding a truth is a difficult task, especially with everyone addicted to the old game called ‘Telephone.’ I don’t see my material as political, since by design I want both sides to laugh. That’s my aim anyway. The PC climate is very charged and navigation is so challenging.

Whatever side, I will admit, I don’t like people telling me how to think or live. Clean your own damn yard and stop throwing your opinion into my yard.

EXTRA CREDIT: If Tim Taylor and Buzz Lightyear met up for a meal in Detroit, where would they go and what would they eat?

One of the many Coney joints for a few…or a spinach pie at Olga’s..wait maybe a few sliders at the Hunter House in B’ham. Damn I am hungry now…what was the question?