Bill Bushart, the self-proclaimed “King of Detroit Blue Comedy,” has worked with some of entertainment’s biggest names, including Gilbert Gottfried, Lisa Lampanelli, and the late Greg Giraldo. In 2010, the Metro Times named him “The Funniest Comedian In Detroit.” He also teaches a stand-up comedy class at Mark Ridley’s Comedy Castle in Royal Oak. We asked him a few questions…

I hate trying to describe my act. If people ask me questions about comedy I cringe. To me it’s like asking an accountant what it’s like to be an accountant. No one wants to hear that story.

I was a dysfunctional 30 year old white male with a smidgen of a drug problem. So I fit the criteria at the time. Plus I hated my day job. I hated my boss. I hated myself for not wanting more.

Comedy was just a way to escape what normal people do to pass the time. It was a challenge and it can make you bitter. But what I’ve gained from being a road comic has been invaluable. I’ve had so many great experiences and gained a lot of friends along the way. 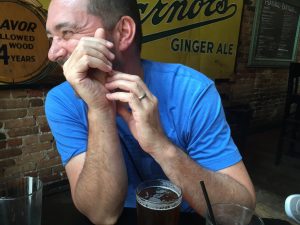 3. Who were some of your comedic influences? What did you admire about them?

Some of my favorite comics (and truly the most influential) are the ones who wear sport coats and push the sleeves up.

It took me a long time to figure out what the hell I was trying to accomplish. I reveled in audience disliking me for a while. There was something refreshing about being over the top and confrontational. To me just being in the moment on stage always brings about growth.

5. You teach a stand-up comedy class at Mark Ridley’s Comedy Castle. Tell us what students learn in that class.

I’ll say right now I don’t teach comedy. I coach public speaking with the emphasis on stand up comedy.

There is a lot to cover. But what I hope they learn is the important of organizing their thoughts, believe in themselves and don’t be afraid to fail.

I can’t teach someone to be funny. But you help give them with some direction, honest feedback and motivation.

Plus, we write lots of jokes.

6. What have you learned about comedy by teaching it to others?

I’ve learned that most people want the same thing, opportunity and recognition. I also think I’ve gotten better in seeing the potential in others. 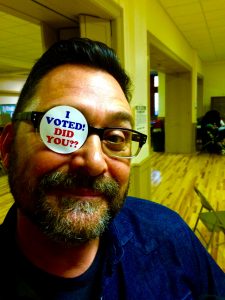 I’m currently running the 7th Annual L.A. Comedy Express Comedy Challenge from the Comedy Castle. I also recorded my shows at the Comedy Castle in August for a new comedy album. Mostly I’m working the road and ruining date night across the Midwest.