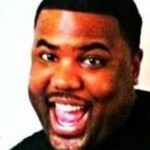 Cam Rowe is a reality TV personality, stand-up comedian, and failed basketball star from Southfield Michigan. He has been doing comedy for nearly five years. He was a series regular on the TV show Storage Hunters on TRU TV and has also appeared on Comedy Bang Bang! We asked him a few questions…

My comedy is very honest. It’s based on my real life. The best way to be original in stand up is to talk about things that really happened. Sure you can exaggerate on things but everything starts from an honest place. Finding your truth is key!

I’ve always wanted to do comedy but I was too damn scared to try it! Growing up I was a huge fan of Eddie Murphy and Bill Cosby. I had a VCR in my room and used to take my Dad’s Eddie Murphy Raw video (in addition to his porn collection) from under his bed and watch that special every night before I went to sleep. I had to be in first grade. I would record every episode of The Cosby Show and watch it all the time. I wanted to be a Cosby kid so bad — kinda still do!

Over the years, I became a fan of stand-up and couldn’t believe people got paid to do this. One day, I finally got the courage to do it at an open mic at The Comedy Store in Los Angeles. I was so nervous that I closed my eyes when I told my first joke. Three out of the four people that were in the audience laughed. Once I heard that laughter, I was hooked and been doing it ever since.

3. You are 6’9″ tall. When you have a physical characteristic that people immediately notice, do you feel the need to address it in your set?

Yes, I like to address it right away. The reason is that most people in the audience are thinking, “Damn this guy is big! I mean, he’s literally the size of an NBA or NFL player! Why is he up here telling jokes?!” Addressing it prevents the audience from being distracted by it. Plus, being 6’9 is a truthful part of my life, so it’s good to tell that story and give the audience a little background so they can get to know me. Once they know me a little, Ii makes it much easier to talk about anything on stage.

4. You were on the reality show Storage Hunters. How did you land that role?

Storage Hunters was one of the first of many auction shows that dominated reality TV for a while. It’s about an auctioneer selling off items at various storage units from people who didn’t pay their storage bills. The main characters on the show were real life buyers who make their living off buying these items and selling them for profit!

I was the security Guard on the show known as The Green Mile. It is my job to break up all the fights and keep everybody in line. In the last two seasons, they let me improv a lot so I got to have fun with people, trying to intimidate them. The funny part about that is everybody who knows me knows that I’m a big teddy bear, but the Green Mile don’t take no stuff!

I got on the Storage Hunters by being in the right place at the right time. It was first week living in Hollywood and I was walking through my apartment complex when Sean Kelly, who is the star auctioneer and creator of the show stopped me and said, “Hey man, do you want to be on my TV show?

Without hesitation, I said, “You know I do!”

I was only supposed to do a guest spot for one episode, however the producers liked me and kept me on the next three seasons. That was great and we had a lot of fun. Also, I had just started doing comedy at the time and Sean Kelly was a veteran stand-up comedian. In addition to keeping me on Storage Hunters, he let me workout at his comedy club doing six shows a week for three years. In L.A., it’s very hard for a new comedian to find stage time, so I was blessed to be able to work that room as often as I did to hone my skills.

Storage Hunters is really popular over in the U.K. They still show the reruns in the U.K. five nights a week. We actually went over there do stand-up comedy. It was a lot of fun and I look forward to going back soon!

5. Do you have a favorite story from Storage Hunters that you can share with us?

My favorite Storage Hunters episode was when I got the chance be the auctioneer. There was a beehive on of the storage units and Sean is allergic (or maybe just scared, I can’t remember which one!) to bees, so they had me conduct the entire auction by myself. That was fun because I got to step outside my role and do something different. Auctioneering is a hard job! Kudos and respect to you all!

6. What’s the biggest misconception aspiring comedians have about what it’s like to work on TV?

The biggest misconception is how long it takes to film an episode. You might think a 30-minute show won’t take long to film, however, a lot of times you are there all day. Most shoots we did were anywhere from 8-10 hours! On the flip side, it was so much fun that it doesn’t feel like work.

7. You use callbacks in your set quite effectively. How you think about them when you set out to write?

Well thanks, man! A “callback” is a joke that refers to a joke you told previously in your set. It’s usually used in a different context the second time around. I think if you have a strong enough callback, it makes for a strong way to close your set. Any time a joke hits the audience hard and gets a really good response, I try and think of ways I can call it back. The best way to do that is to record your sets, watch, and study them.

8. You’ve performed at comedy festivals overseas. Tell us about that experience.

Performing overseas was great! As a comedian, it’s such an exciting experience to see how your jokes do abroad. It was a little different for me because Storage Hunters is so popular over there and people recognized me immediately. I was taken aback at first from all the fans because the response in the US is, well…let’s just say different!

So over in the UK when I got onstage people knew who I was already so I got a really good response from the beginning. However, I also was told my jokes were very relatable as I mostly talk about family, kids, and things that happen in everyday life. I’m not a political comedian or anything like that, so I didn’t have to change my subject matter at all. It’s benefit to be able to relate to everybody. As the great Phylicia Rashad once said, “We are more alike than we are different!”

9. What projects are you currently working on?

Right now, I’m working on doing shows around the area. I just did the Treetops resort up North with Dave Landau. That was a great show! Also, there is a big announcement coming soon to all of the UK fans. There is something in the works for later on this year! I’m not sure if I can announce yet but details to come!

EXTRA CREDIT: If you could cast yourself in a TV show with any co-stars you wanted, who would you choose? What would be the plot of the show?

I would love to do a buddy comedy with Kevin Hart! I think the size difference would make for great TV. The plot would portray my character and Kevin’s being best friends. Then my character goes to jail and when I come out I found Kevin has married my mom. Now he’s my best friend and my stepdad! This could be funny with the right people in place.