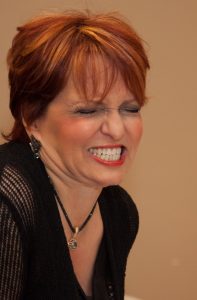 Connie Ettinger began her comedy career 16 years ago by taking the classes at Mark Ridley’s Comedy Castle. She has performed throughout Michigan and the surrounding areas. She has performed on The View with Barbara Walters, and was in the Great Spanks Challenge on WDIV. We asked her a few questions…

I consider myself primarily a storyteller versus a set up, punch kind of comic. My current act focuses on the distortion of Darwin’s theory of evolution by personal injury lawyers and the resulting drop in the intelligence of our country. In other words, if you reward the stupid who hurt themselves by doing ridiculous things with ordinary household objects by giving them with big money verdicts, they will simply reproduce, rather than die out as Darwin suggests. Then, having failed to thin out the herd, their stupid genes get passed on to future generations, and, well, just look at the last election.

I adore Bill Murray because there is nothing so ridiculous that he won’t try it. I very much enjoyed Paula Poundstone while she was still working because of her unique views on ordinary things. But Robert Klein is my absolute favorite because he tells great stories AND plays the harmonica. I admire them all because they are funny and they seem to thoroughly enjoy themselves while they are performing.

3. You used to be a lawyer. How did you cross into comedy?

I am still a licensed attorney in the state of Michigan, but I prefer to think of myself as a recovering lawyer, one legal issue away from my next lawsuit. There are no meetings for that, though. I became involved in comedy when I left my law firm after making partner because I had grown weary of it after about 20 years and my husband suggested that, because he thought I was funny, I should take the classes at the Mark Ridley’s Comedy Castle. Or perhaps he just wanted me out of the house at night. I took the classes, got my first laugh and I was hooked.

4. You book the Holly Hotel and Brew Ha Ha at the Dow Event Center in Saginaw. What should young comedians know about the booking process?

First, always keep your avails in front of the bookers. It’s very easy for us to simply delete them if we don’t need them. Second, don’t get discouraged if you don’t get booked immediately. There is an over abundance of comedians for the number of vacancies that are available. Supply and demand does not work in your favor in this case. Be patient and be persistent, but in a noninvasive way, such as s-mail. Third, be courteous and professional and never take your failure to be booked personally. This is a tough business and one where you need a thick skin just to avoid Prozac.

5. You perform many different types of gigs, including corporate events and private parties. What advice would you give to younger comedians about versatility?

You need to be able to roll with the punches in terms of type of material. That is, you may have to switch, without notice, from your usual PG-17 or R-rated club set to a “Christian Clean” set without any notice. You also need to be flexible with how much time you are doing. Your time could be cut by as much as 15 minutes or extended by as much as 30. I recommend being able to break your set into discreet five minute increments so that cutting and adding is easier.

Also, the word “fuck” should not be an article of speech and is not necessarily funny. However, there are cases where no other word will do. Your challenge as a comedian is to know the difference.

6. Tell us about your first headlining show.

I truly do not remember where I first “headlined.” It was probably some little bar gig but I’m sure I was very excited about it. I prefer to call myself a “closer” instead of a headliner because, to me, headliner implies a level of skill I have not yet attained. I assume it went well because I didn’t quit.

7. How has the Michigan comedy scene changed in the time that you’ve been doing comedy?

I missed the golden age of comedy by about ten years. Comics were paid much more then and there were more clubs in which to work. Now, “real” clubs are closing at an increasing pace and being replaced by what I call pseudo-clubs. Just because a bowling alley has a microphone and a riser to stand on, however, does not make it a comedy club.

Also, the advent of comedy classes has exponentially increased the number of would be comedians and the laws of supply and demand are alive and well. Many newer comedians have, of necessity, tried to start their own “clubs” in any bar or basement that will let them. This is not good for the overall business of comedy, in my opinion, because many have “bringer” shows or show-up-and-go-up formats, and very few offer pay except in the form of beer. Some would argue that this gives new comics much-needed stage time. However, the proliferation of cage-fight type bar gigs is what, in my opinion, is contributing to the closing of many legitimate clubs. And once you, as an audience member, have had a bad comedy experience, you are much less likely to go to a live comedy show of any kind. I urge new comedians to be very cautious in setting up open mics or other non-club shows in venues that are not well suited to comedy, i.e., loud rooms with constant foot traffic, poor sound systems, or other features that do not mimic a legitimate A room. If your green room is in a shared space with the dishwasher, stay away!

Now, I can’t give away my secrets. Suffice it to say that I am always looking for new venues for first class shows, even if those shows are not done on a regular basis, and I’m always looking for something amusing to write about. But I stay far away from political humor because I find it very divisive, especially now. I don’t like violence in my shows and people seem to be taking their politics these days with an extra strong dose of, “I’m right and you’re stupid.”

EXTRA CREDIT: If you had to be stuck on a desert island with any three celebrities, who would they be and why?