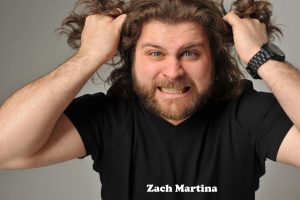 Comedian Zach Martina hails from Brighton, Michigan. He’s been doing comedy for over five years. I asked him some questions about his comedy career…

I tend to talk fast and I’m loud. Most of my material is about being a husband and a stepfather.

My favorite summation of my comedy came from Dan Currie (co-Founder of Mac’s Monday Comedy Night in Lansing) when he said, “Zach delivers some of the darkest jokes in the most delightful manner.”

Throughout high school, Comedy Central Presents and re-runs of SNL on Comedy Central were pretty much all I watched. Never even considered doing it until I was 25 and managing a restaurant. I started a monthly comedy night and one of the headliners recommended Bill Bushart’s class and told me, “Try it out. What do you have to lose? Worst case scenario; it goes terrible and you’ll never see those people again but at least you can say you tried. Best case, it goes well and you’re hooked.” Next thing I know, my calendar filled up to the point where one of the owners of the restaurant told me, “You can be a comedian or you can be the manager, you can’t be both.” I don’t manage the restaurant anymore.

3. You just toured the East Coast. What tips can you offer new comics looking to put together their first tour?

Yea, I was going up and down the east coast with Rory Scovel who is, bar none, my favorite comedian. He and his representation put the tour together and I was lucky enough to be invited to be his opener. I learned a few things about putting together a tour but what I really took away was how to try to be a better comedian. The first and only question Rory asks after every set is, “Did you have fun?” It doesn’t matter how juiced the crowd is or how great the jokes are, if you’re not having a good time up there then what’s the point? Oh yea, and figure out how to get comfortable in silence.

4. Do you find that your style of comedy works better with some audiences that others? What strategies do you use to adapt to that?

I don’t know if my style works better with some audiences than others, but I am definitely in your face and the crowd doesn’t really have a choice as to whether or not they’re going to listen to the things that I have to say.

However, being that my material is very family oriented (not necessarily family friendly), I feel like I appeal to quite a wide age range. I’ve crushed and I’ve bombed with high school seniors. I’ve killed and I’ve died with retirement communities. I’ve succeeded and failed with everything in between. The way I feel is that, whether it went good or bad, if I can come off stage and say I enjoyed myself then that’s a win.

Some of the time, I’ll be living life and in any given day, absurdities occur. I write those down as they happen and then I sit down at night and try to flush it out. I make lists and I ask the “who, what, when, where and why” on every premise I try to develop. After I get a few plot points, I write the first draft and take it to stage. Then I listen to the joke on the way home, write it’s next version and take that to stage. I repeat that until I feel like I have something that is tight and can hit hard. Write. Edit. Perform. Repeat.

And then most of the time, my kids say funny things and I twist their words in an attempt to exploit their childlike wonder and innocence.

6. You’ve got a good looking website. Do you think that has had an impact on your comedy career? What advice would you give to comedians about building a website?

Thanks. I can’t really take too much credit for that. My wife’s best friends are a graphic designer and a computer programmer. I told them what I needed and they made it happen.

The website has had a huge impact on my career though. When I was starting out and calling clubs and bars about getting booked, the first and, usually, only question they’d ask is, “What’s your website?”

My website has been such an asset to me because it’s to the point and easy to navigate. Picture, bio, clip and dates. That’s really all you need.

7. Tell us about a moment in your comedy career that you’re particularly proud of.

I’m pretty grateful for a lot that’s happened in my 5.5 years of doing comedy. Clubs, bars, and festivals have taken me to foreign lands, across the U.S., and straight into debt.

But easily, one of my proudest moments was going on the tour with Rory. Twenty-five shows in twenty days and feeling that I was actually getting better and better. I came off that tour confident and inspired. I thought I was a a hard worker before and then I saw the work that one of the top comics in the world puts in and realized I’ve got to kick it into overdrive. I definitely feel revitalized and am excited to see what I can make happen in the coming years.

Writing a lot. In the early phases of a web series with Adam Degi out of Grand Rapids. Working on a semi-autobiographical sitcom script. Getting a couple festival & television submissions ready to go. Anything I can do to feel deserving of those drink tickets.