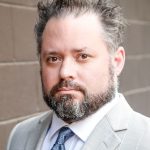 Stand-up comedian J Chris Newberg hails from Birmingham, Michigan. Since launching his comedy career in 2000, he’s appeared on numerous TV shows, including The Tonight Show, America’s Got Talent, Last Comic Standing, and Jimmy Kimmel Live. He’s also has a number of producing and writing credits under his belt, including shows from Fox, NBC, Showtime, E!, Hulu and more. We asked his some questions about his career…

My comedy is fun, but I’d much rather have people see me and decide for themselves.

I failed as a musician and wanted to keep performing, so I started trying stand up and learned it’s just as hard.

3. Your performances often include guitar. Tell us how you think about guitar when it comes to your act.

I use the guitar because I like music. I used to feel guilty about it, but why? I can play and sing. Plus, it adds on occasion. It’s just another weapon I use to get laughter.

4. You’ve written and produced for television. How did you cross into that?

I started in TV when my friend Ben Gleib got on Idiotest and he was able to get me hired. From there, I just kept learning and hustling to do the best I can as often as I can.

5. You’ve also written songs for American Idol. Tell us about that experience.

I wrote a song for Dane Cook about roasting Simon Cowell. It was super fun.

6. You have also written jokes that have appeared on Saturday Night Live, David Letterman, Conan O’Brien, and others. How does a comic get into that type of work? What are the secrets to doing it well?

A comic gets lucky, because that’s how it happened to me. The secret to doing it well is doing it often to prepare.

7. You’ve performed on national television, including The Tonight Show with Jay Leno. Tell us what that experience was like.

It was the most fun I’ve ever had on stage. It was a set that I’d worked on forever and got a good pitch and really hit the ball.

EXTRA CREDIT: If you could write the script for a live-action film adaptation of any children’s cartoon, which would it be?

Peanuts, but this time Charlie Brown would be a womanizing stud and never miss the football.