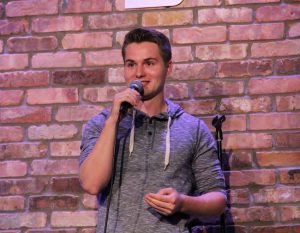 Stand-up comedian Brenton Biddlecombe began his career in Detroit and now resides in Los Angeles. He’s a regular at The Comedy Store, the Hollywood Improv, and Ice House comedy clubs. He’s opened for Bill Burr and Louie Anderson, and he tours the country with Pauly Shore. We asked him a few questions…

1. How do you describe your comedy to somebody who has never seen you?

I would describe my comedy as a mix of one liners, bits, and personal stories. I try to be pretty well rounded. I can be squeaky clean — I’ve opened for a guy who did all ages shows and performed to literally 8 year olds — as well as dark and dirty (don’t be clean when you go up at 1:30am at The Comedy Store).

2. You moved a lot and frequently changed schools as a child. How did that influence your comedy?

I was always the new kid. I’m naturally shy so it was hard for me to fit in. Every time I felt like I made a few good friends or started to fit in, we would move again. When I developed a passion for comedy, I saw it as a way to connect with people. I had a great childhood and I have three brothers that I’m very close with. I never felt a void of love at home. If anything, they gave me too much support and probably put a ceiling on how funny I can be from being so well adjusted. In turn, I developed this void of getting love from the strangers that ignored me growing up. That sounds weird, but since I didn’t have a lot of friends, you want what you don’t have right? Comedy for me is all about, “I hope they find this funny so they’ll want to high five me after the show.”

3. Your first open mic performance was at Mark Ridley’s Comedy Castle. Your second was at a bar called The Rusty Nail. Can you tell us about both of those experiences?

My first open mic at The Castle was a whirlwind experience. I did five minutes. I remember getting laughs and it was over so quickly. I got hooked immediately. I felt like I could really do it. Then I went to a bar mic at The Rusty Nail. I showed up at 9pm when I thought it started. I was 19. The mic didn’t start until 11:30 so I sat there with the bartender making awkward conversation for a few hours. I couldn’t drink and there was literally no one in the place: Me, the bartender, and a server. A few people and the host came in around 11. I went up and bombed so hard I didn’t go back on stage for about four months. I almost quit.

4. You moved to Los Angeles after winning a comedy contest. Tell us that story.

I performed in a contest that took place at Joey’s Comedy Club (R.I.P.) which is now held at The Castle. I was 21 when I won and still in school at Oakland University. I went out to The Comedy Store and did my first show in the Belly Room. Bobby Lee came in the green room before I went up and asked “when is the kid going up, I want to watch the kid.” I had a pretty good set and I could hear him laughing. After the show, he took my to dinner and convinced me to move. I was out there about 5 months later.

5. How did the move to Los Angeles go? What advice would you give to Michigan comedians thinking about making that move?

My move was good because I had been planning to move to either L.A. or N.Y.C. a year before I won the contest. I had a decent amount of money saved. The advice I’d give to any comic looking to make that move is to save double what you think you need to live on. It disappears fast. My rent is more than my parents’ mortgage and they have a really nice house. I live in a very small, small place. But I haven’t shoveled snow in seven years.

6. You have worked as a regular at The Comedy Store. Tell us how you landed that gig.

I started working there as a parking lot attendant. Comics would come in and I’d park their car. Everyone who works at The Store for the most part is an aspiring comedian. I hung out every night for 7 months asking for a job. It’s like going to college for comedy. When a job in the lot opened up, I lied and said I could drive stick. Still can’t. But I eventually worked my way up to seating the room and working the phones during the day. Four years ago this month I took over the social media and website. I love it because it’s a day job that’s in my field and I can work the road and still do my job. Dream job for an up and comer.

7. You started as a one-liner comic. Talk about your writing process.

I started as a one liner comic simply from lack of life experience. I was 17 when I started writing jokes. All I did every day for years was listen to Steven Wright and Mitch Hedberg and try to dissect their jokes and figure out how they were getting laughs. I developed a formula that worked really well for me. When I moved to L.A. I started having experiences. Most of my stuff is now written in the moment, and is — for the most part — true. I love one liners, but the stuff that’s real is more fun to tell.

Aside from performing comedy nightly, I currently run social media for The Comedy Store as well as The All Things Comedy Podcast Network (Bill Burr & Al Madrigal’s network). Check out the roster. It’s an honor to get to work with so many of my heroes.

EXTRA CREDIT: If you were asked to DJ at your favorite celebrity’s wedding, whose wedding would it be and what songs would you play?

I would want to DJ Bill Burr’s wedding. I’d play John Williams (film composer who did Star Wars, E.T., and a bunch of other scores, he’s my favorite). Bill would call me a fairy and go on a rant about how worthless DJs are. I’d eat two pieces of cake.