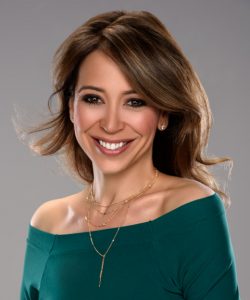 Though originally from California, comedian and actress Nicole Majdali now calls Detroit home. In her five years of stand-up comedy, she has performed at The World Famous Comedy Store and The Improv, and also appeared in the documentary film Make Me Laugh with Russell Peters and Maz Jobrani.

Her short film, Pretty Funny Nicole, based on her life and her stand-up comedy, recently won the L.A. Shorts Film Festival and the Best Comedy in Hollywood Film Competition. Emagine Royal Oak will host an exclusive screening of the film and a VIP Party on Saturday, September 30th.

We asked her a few questions…

I usually tell them they have to come see me to find out. So I guess you can say sassy. For my bios I typically use: “Nicole’s whimsical personality and witty observational humor keeps crowds laughing (there are well placed groans in there too). Nicole has good-humored opinions about being single in a date-crazy world!”

2. You’re a California native. What brought you to Michigan?

I moved here from Long Beach, California with my ex-husband who was from here. I ended up staying here and creating a nice life here. I’m comfortable in Michigan and have called it home. I love the life here. It’s easier to live and I stay busy enough to still enjoy life. I go visit my family and do comedy in L.A. every three to four months. It has worked out very well for me.

However, due to the success of the film and a couple of exciting projects in the works the time has come to get back to L.A. I will be keeping everyone posted on my Pretty Funny Nicole Facebook page. It’s my most informative social media outlet. I am not as active on the others or I keep them for more personal use.

3. How did you get started in comedy?

Five and a half years ago I took a class just to help me overcome my fear of it. I challenged myself. It was not something I really wanted to do. It went pretty well and I immediately got hooked.

4. You used to suffer from stage fright. Tell us how comedy helped you overcome that.

Every time I perform I face that fear and punch it in the face. The stage fright didn’t go away, I just got more comfortable with it.

5. Tell us about the film Pretty Funny Nicole.

It is a short film based on a part of my very crazy and interesting life. It is actually a lot more serious than it appears. It is an inspirational story ending with the comedy and where I am today now truly living out my dreams. I would honestly say it had more people crying than laughing at the cast and crew screening. Right now, it is being shown at film festivals around the world. It was accepted and won its first Platinum award in its first film festival, L.A. Shorts. We also recently won Best Comedy in Hollywood Film Competition! We are very excited and the feedback from the film was incredible! It has a special message and I am thrilled its already had interest as a feature film. It’s very weird to know your life is going to be shown as a film! I’m already looking forward to filming some of it in Egypt where I went to high school.That will be such an awesome experience. I can see all these amazing things happening next, its keeping me very busy.

6. Tell us about your favorite on-stage moment.

Two immediately come to mind. I had a really long laugh break while performing at the Royal Oak Music Theater this April (on my birthday). It was an incredible feeling! The laughter surrounds you in that place . I could literally feel the laughter that moment. It was awesome. Another one, is having my childhood friends and my family come see me perform at The World Famous Comedy Store in Hollywood. It was awesome. I should say getting laughs on that stage makes me feel amazing, if I wasn’t it might be a whole different experience.

7. Tell us how you work new material out. What it your creative process for comedy like?

I’m still figuring things out but I like to jot down an idea and then just say it at open mic. I record all of my sets. Then I listen to it and see if I can add more and more week by week. I have learned to love open mics and appreciate the opportunity to just try things. I play a lot at an open mic more than I would at a big show. I find I do most creating in front of the audience.

I love the open mic at Ann Arbor Comedy Showcase. I just have fun there and it allows me the freedom to play and see if jokes work . The audience is kind yet smart. You have to be good there. 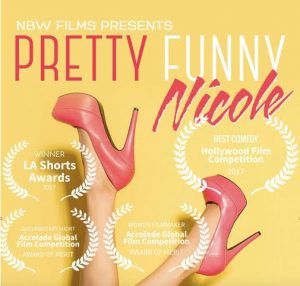 I have a few exciting ones being worked on now. The biggest one I can share is Pretty Funny Nicole the feature film. It is very time consuming and emotionally draining. The last scene I worked on had me crying for a week. Fortunately, I show up to do comedy and that performance rush saves me from staying down too long. I have performed this year on some very difficult days. I believe the show must go on. Even though it was open mic I still went after very sad events and challenged myself to perform.

Also, I’m looking forward to a film/documentary I shot in Hollywood starring Maz Jobrani and Russell Peters called Make Me Laugh. Look for it. In the stand up world I’m heading back to L.A. for some shows early this fall. Plus, I have another exciting project with some amazing people in Hollywood. That one will be shared once in production. Follow my social media pages Pretty Funny Nicole and Pretty Funny Nicole the Film for more information.

EXTRA CREDIT: If you could star in a commercial for any product, what would it be and why? What would the concept of the commercial be?

I would love to be in a MacBook commercial. Mostly because I am obsessed with mine. I love Mac and am totally a Mac! I take my little gold MacBook everywhere. I would make it like a seductive jewelry commercial but with the jeweled color MacBooks.

It could be funny. A woman might be less likely to break off engagement and have to give back her Gold or Platinum Macbook once its got all her info on it and customized desktop picture! Otherwise I would just advertise how I can do anything on this baby. I can’t leave home with out it. Oh wait that’s someone else’s slogan