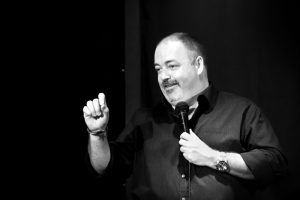 Originally from Indianapolis, 18-year stand-up comedy veteran Matt Holt recently moved to Frankenmuth. He has appeared on The Bob & Tom Show, released two albums on iTunes; the latest, Acting My Age, debuted in the top 5 on iTunes comedy charts. Matt has written two critically acclaimed one-man shows and performed for The USO, The Wounded Warrior Project, Helping Hands For Freedom, and other military charities.

Man, that’s a tough one for me to answer. I say that because I’m just me on stage. I get up and I talk about my life. I’m essentially a storyteller. Back in 2015, I wrote, produced, and performed my first one-man show, Thank You Johnny Carson. That show was all about the impact my father’s appreciation for Johnny Carson had on me and how it influenced me to want to be a comedian from a very young age. While writing that show, I really found a new appreciation for long-form material. People tell me after shows all the time that I seem so “comfortable” on stage. So, I guess that’s how I describe myself…a comfortable storyteller who hopes he’s relatable to most audiences.

2. What brought you to Michigan? How are you adapting to the Michigan comedy scene?

A girl brought me to Michigan, of course! I’m originally from Indianapolis. I’ve lived there all my life until this move to the Mitten. Adapting to the Michigan comedy scene has been pretty simple. I’ve always done a fair amount of work up here anyway. The move has allowed me to do even more, which I really enjoy. I have a lot of really good, close friends in the Michigan scene so it felt like home immediately.

3. Brad Garrett helped you start your comedy career. Tell us the story.

Wow, that’s a long story. You can hear it entirely on the Dr. Grins Podcast, but I’ll try to quickly cover it here as well. Back in 1989/1990 I was able to go to a comedy club for the first time. Turning 21 for me meant going to see live comedy — drinking wasn’t nearly as important to me. So, the club in Indianapolis is where I first saw Brad Garrett for the first time. I had come to know of him from his constant appearances on The Bob & Tom Show and thought he was hilarious. Then, when I saw him live for the first time, he blew me away. To this day, he is still the funniest stand up I have ever seen, Well, I would go see Brad 4 or 5 times every week he’d come to town. Eventually, we got to become pretty friendly with one another, and started drinking together and playing gold together whenever he was in Indy. He was the first person I had told that I wanted to be a stand up comic. He urged me to just get on stage and give it a shot, but I was too scared.

One day in Spring of 1994, we were playing golf in Indy (It was the day after the bodies of Nicole Brown and Ron Goldman were found in Brentwood, and the OJ saga began; I only remember because Brad and I discussed it all day on the course). Anyway, after we finished the final hole, Brad said, “You’re doing 5 minutes tonight in front of me — a guest set” I said “No way, you are out of your mind! I can’t do that!” He refused to let me off that easily and he convinced me to get on stage that night. Fast forward to 8pm, I’m in the showroom of The Broad Ripple Comedy Club. Just before showtime, I’m freaking out. I’m not ready. I’m scared. I go to the green room and I back out. I explain that I’m just not ready and I don’t want to embarrass myself or anyone else. Brad was gracious and understood. He told me to be ready to get up there when he came back to the club. I agreed. Brad finished out the week. I saw him after the last show. He reminded me to not be such a pussy the next time he was in town and we said goodbye. Brad never came back to Indy. He was cast in Everyone Loves Raymond and his entire life changed. I didn’t get the nerve up to get on stage for the first time until Sep 20, 1999. But I honestly believe without that initial push from Brad, I may have never gotten on stage at all. I am forever grateful to him for that.

4. You come from a large family. How does that influence your comedy?

Well, I’m the youngest of 8 kids, so I imagine that a lot of my decision to be a comic evolved organically from just trying to get attention when I was a kid. But I also come from a funny family. My parents were both funny. My mom was sarcastic and fun and my dad was a great joke-teller. My sister, Jenny, has a great sense of humor and my brother, Chris, is a musician. So I have artistic, creative people in my family.

5. Your first marriage ended in divorce. How did that experience influence your comedy? 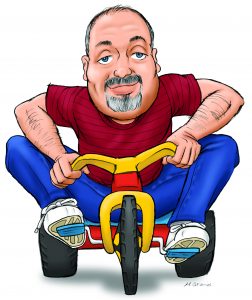 Well, the way it influenced my comedy was by giving me the opportunity to do my first open mic. I got divorced in 1999. As I was going through the divorce I was looking at my life and deciding what I wanted to do. It seemed like a perfect time to start something new…something I had dreamed of. So I signed up for my first open mic. I fell in love with it and I have not stopped performing since. Initially, some of my material was about my divorce, but I have long since dropped that from my act.

6. You do a lot of crowdwork. What advice would you give to young comics learning how to work the crowd?

My advice to young comics is to not worry about the crowd. Write and perform your act. It amazes me to go to an open mic and see a comic do 6 minutes of crowd work. It makes no sense to me. Plus, you’ve just invited the crowd to interject the rest of the night. My crowd work is very organic. It’s not “hHey buddy, who told you to wear that shirt? You look like an asshole!” or “What do you do for a living?” I just have a conversational style and I can go from my act to the audience pretty easily and nobody even notices that I’ve involved the audience. There have been times when I’ve gone on stage and started having a discussion with my audience and have never gotten to any of my material. I usually do something like that when I have a very small crowd. Small crowds can be tough to perform an act for. The energy in the room may be too tight for them to really have fun. Here’s my opinion on mistakes young comics make: doing crowd work when you aren’t the headliner. Features should not be doing crowd work. You have 20 to 30 minutes and you have the sweet spot of the show — no pressure. Do your material and set up the headliner, period.

7. What is the biggest mistake you see young comics make? What should they do instead?

Young comics focus too much on everyone else around them in the business. Don’t worry about what everyone else is doing or getting. Focus on being you and be ready when an opportunity comes your way. Also, don’t feel like you’re above hosting. Of course you want to do more time and make more money. We all do! But hosting is a true art and a great tool to have at your disposal. The best advice I ever got in this business was, “Great emcees make great headliners.” There are a lot of comics who start featuring early, but then they feature for 20 years. Because when you learn to host and you do it well, you learn to open a show and deal with the distractions that come with the beginning of a show. As a headliner, you have to deal with similar distractions, like the check drop, etc. If comedy is what you want to do with the rest of your life, then what’s the hurry? It’s a cool gig. Enjoy the ride.

My road schedule is a constant project. But aside from that I have a few things brewing. I’m trying to get a podcast off the ground. I’m in the planning stages of that. I’m not very tech-savvy and I hate the idea of learning to edit..so that is slowing me down. I’m beginning the process of writing a new one-man show (this will be my third). For me, that is a long process, so I will likely be at it for a year or so. I also have a few ideas for scripts (both sitcoms and screenplays) that I want to develop, so I’m planning on taking a class at Michigan Actor’s Studio in the spring.

EXTRA CREDIT: If you could wiretap anybody, who would it be?

My initial reaction to this question would be to wiretap the phones of all the bookers I deal with to see if they ever actually talk to a comedian who calls them.

But, realistically, I don’t think I’d want to wiretap anyone. The problem with listening in on someone is that you likely will hear things that you don’t want to hear. And once you hear it, you can’t unhear it. The idea of that makes me crazy…and I’m someone who tries very hard to keep drama out of my life. So I’d probably just pass on the wiretapping.