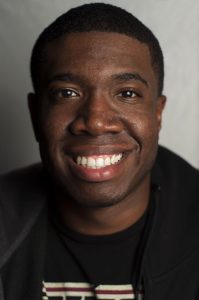 Originally from Detroit, stand-up comedian Robert Jenkins currently resides in Lansing, Michigan. Since starting comedy in 2012, he has appeared on the Fox television show Laughs, participated in Laughfest’s Best of the Midwest Competition and will be appearing at the Bridgetown Comedy Festival in Portland, Oregon this year. We asked him a few questions…

Serious topics punctuated by silly random thoughts. I try hard to be as honest as I can be. I do say harsh things, but not for the sake of being harsh — I try to make sure they pay off.

I’ve liked standup comedy since I was a young kid, but I never thought it was something I could do. In 2012, I started going to therapy to work through a few things. We started talking about hobbies and interests. When we started talking about comedy, my therapist suggested I give it a try because he said my whole demeanor, mood, and affect had instantly changed. I went onstage the first time on July 5, 2012.

3. You are one of the people behind the very successful Mac’s Monday Comedy Night at Mac’s Bar in Lansing. Tell us about that.

It started about five years ago. At first, we didn’t have much of a crowd at all. Once Dan Currie and Mark Roebuck decided to switch from a standard open mic format to a showcase/open mic format with five regular performers, we started to build a following very slowly.

4. What’s the secret to organizing a successful showcase like this?

I think one thing that’s important is for people to be happy with being part of something without having to be in charge of it. Recognize that everyone can have a part in a good thing. Mark and Dan do all the booking and organizing of the show. It’s pretty much always been that way. They developed a formula that works and it’s very much their show. My part of the show is to promote it and keep writing and performing to help make it a great show.

5. What’s the best piece of advice you’ve gotten from another comedian?

I used to worry about remembering the jokes I wanted to do, so I would always write down a set list and try to memorize that. A comedian told me to not worry about memorization. He told me to start the same and end the same, but then to do whatever joke came next. That helped me immensely. It helped me learn how to feel my way through a crowd. It helped me be quicker on my feet. Also, since I’m not worried about remembering things, it helps me be more in the moment.

6. You recorded your first album, Achievement Unlocked, in 2015. What did you learn in the process? What advice would you give to other comedians looking to record an album?

Try to have fun with it. Don’t do a CD because you think it’s something you should do. I did mine because the new stuff I was writing seemed very different from what I had written before so it felt like a good jumping off point.

7. You’ve opened for a number of notable comedians. Who was the best to deal with offstage?

Everybody I’ve worked with has been pretty cool, but I haven’t had a lot of interaction. I try to stay out of the way and get myself ready for the show.

Right now, I’m just working on writing new material and going up as much as possible, but I do have a few festivals and club dates coming up.

You can check robjcomedy.com to see when I’ll be near you.

EXTRA CREDIT: If you could build a time machine and travel to anywhen, when would you go?

I’d go back to the end of the Civil War and try the the Confederate Army for treason.